Jesus’ trial before Pilate oozes truth about Jesus’ true identity and His purpose on the earth.

And yet, he released the real criminal, the sinner.

And so Barabbas walked free, a fore-runner of you and me!

Yet the innocent One was condemned – all of our gospel story.

Pilate had Jesus flogged by soldiers, they mocked Jesus mercilessly.

Jesus was silent just as had been prophesied (Isaiah 53:7)

Pilate then repeated same verdict two more times; “I find no guilt in him”! (vs4&6)

Dripping with irony, Jesus is accused of claiming to be exactly who He was – God! (vs7)

Pilate then questions Jesus again and lectures Jesus on authority!

Jesus replies; “You would have no authority over me unless it had been given to you from above.” (vs11)

Pilate shivers in his boots & tries to release Jesus again having found nothing wrong with Him, but the Jews revolt…

Pilate pronounces the truth about Jesus to those present, “Behold your King!” (vs14)

But Jesus is rejected by the Jews again, they don’t want Him as king they want him dead.

Pilate re-checks with those present, proclaiming truth as he does; “Shall I crucify your King?” (vs15)

Blasphemously they cry out; “We have no king but Caesar!” (vs15)

And so Jesus was condemned to die by crucifixion.

Pilate, God’s agent in the moment states the truth again as he inscribes on the cross; “Jesus of Nazareth, the King of the Jews” (vs19)

Jesus, King of all kings, came to die in our place for our sin, the Lamb of God, the suffering servant, He the sinless One was bound so we could be freed, He was crushed for our iniquities and the punishment that God put on Him paid the way for us to be forgiven, His death and resurrection gave you and me life!  Behold your King! 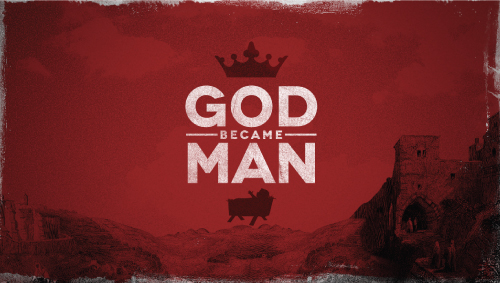 As we start December, what a fitting way to begin contemplating who Jesus is and why He came to earth.

And the Word became flesh and dwelt among us, and we have seen his glory, glory as of the only Son from the Father, full of grace and truth. (John 1:14)

God became flesh. Creator God entered His creation. God moved into the neighbourhood of people like you and I. God who is not constrained by time and space constrained Himself to time and space. God, who does not change, became like us so as to communicate with us, be understood by us, and ultimately so that He could die for us in our place for our sin! God the immortal One, took on mortal flesh so as to give us immortality.

And why? Why did God do this? Why did Jesus enter our humanity?

So that He could become the sacrificial atoning Lamb of God who could take away the sins of the world (vs29). He had to become like us, so that he could die for us in our place for our sin.

So that God could adopt as His own beloved children all those who believe in Jesus (vs12).

Jesus we stand amazed. Jesus there is no one like you, no one who can compare, no one who has gone to such great lengths to love us – we worship You and adore You.

This entry was posted in Awe, Jesus, Worship and tagged Behold.